The recent discovery of an enamel sign 16ft long and 18" high made by ‘Chromo of Wolverhampton,’ now in the safe custody of Peter Churcher of the ‘Victoria Book Shop’ in Bere Alston has caused much head scratching, not only amongst locals but also amongst railway enthusiasts, as no record of the sign or of Bere Alston ever being officially known as BERE ALSTON JUNCTION could be found, (even though it was and still is a junction). The colour, white lettering on a dark blue background is also confusing as it does not seem to conform to the colour scheme of the railways involved (L&SWR and the PD&SWJR).

So who’s sign was it and more interesting, where was it?

Bere Alston only became a junction in 1908 with the opening of the PD&SWJR’s branch line to Callington so the sign must be post that date. Running in boards and station furniture were not a priority subject for early photographers but a trawl through our collection of photographs turned up some interesting results.

The photograph left of a down goods entering Bere Alston shows the early style of L&SWR running in board which reads:- 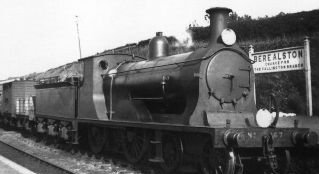 The colour of the dark lettering on a light background is subject to debate but there seems to have been a degree of regional autonomy with the light colour described as white, cream and salmon and the dark colour described as black, brown and stone but from 1906 onwards an attempt was made to standardise the colours. 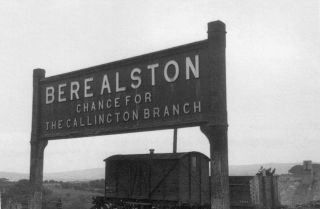 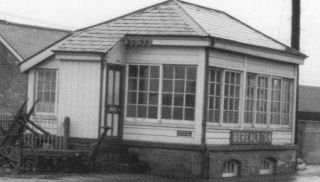 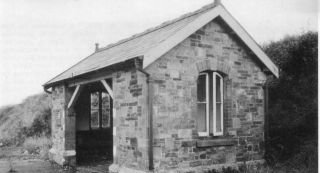 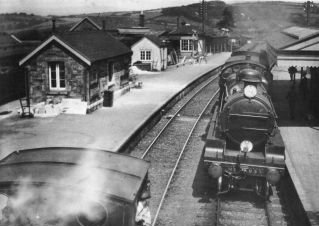 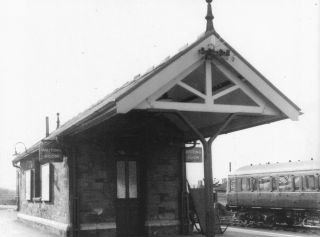 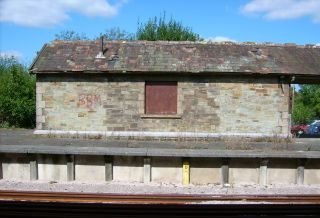 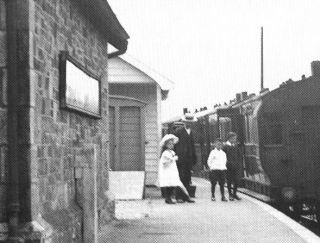 Later photographs show the signs as white lettering on a dark background (white on green )and confirm that the running in boards that faced the main line on both the up and down platforms were worded the same, butthese were not originally enamel, rather the existing L&SWR boards repainted. 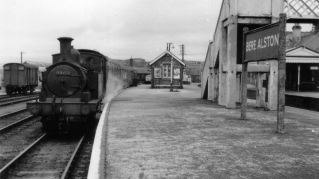 Another possibility was the signal box (left) but another photograph confirmed verbal information that the sign on the front of the box said:-

There was no sign on the rear of the signal box as the branch line platform ended before the box.

It can also be seen that there is a window in the middle of the waiting room wall.

In 1926 building work was carried out at Bere Alston. Up to that date the L&SWR and the PD&SWJR each had their own signal boxes but after the grouping in 1923 they both became part of the Southern Railway. The PD&SWJR signal box was closed and the L&SWR was extended to incorporate the leavers previously in the PD&SWJR box as can be seen in this  1926 photograph (left) which captures the work being carried out.

At the same time the waiting shelter was altered by opening one end window into a door, closing over the up platform opening except for a window and putting a new window in the rear wall. The Tavistock end roof was extended to form a canopy supported by a neatly fashioned recycled bullhead rail (left).

Left: the waiting room today but the original opening from its time as a waiting shelter can still be made out by the different coloured stonework.

Then we came across the following photograph that was taken c1910 that showed the branch line side of the waiting room when it was still a shelter and ‘bingo’ there was a sign on the wall, but was it our sign, and was it 16ft long?

A trip to Bere Alston confirmed that the waiting room was 32ft long, an enlarged copy of the photograph allowed us to follow the pattern of the stone and mark the wall where the sign started, it was exactly 8ft in from the edge. If the sign was symmetrically installed, and I am sure it would have been, that would put a 16ft sign right in the middle of the wall.

A close look at the wall and the repaired original fixing holes could be seen.

We are now confident that we now know where the sign was and that it was put there by the PD&SWJR but why, we do not know. The company’s loco’s were lined blue but their coaches were green as were their uniform. The colour scheme of the branch line station buildings was the same as the L&SWR. and the branch line running in boards were the same as the early L&SWR (dark lettering on a light background).

Could it be as simple as a small company making a statement and is there any significance that the sign is directly above the PD&SWJR’s ‘0’ mile post, or…… was it the work of Holman Fred Stephens 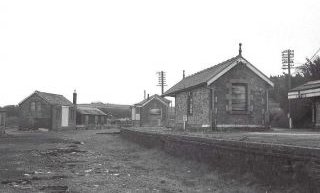